Capturing carbon for a brighter future

Aker Carbon Capture is a leading carbon capture provider.
We strive to mitigate the environmental cost of industry for a brighter, more sustainable future.

Global warming is one of the biggest environmental challenges we face today.

Large CO₂ emitters in cement, waste-to-energy, steel, and other heavy industries need to invest to become carbon neutral and maintain their license to operate.

The cost of emitting CO₂ is only set to increase, driven primarily by increasing national and regional pricing initiatives.

EU cost of pollution at a record

We have 10 years of experience with modular capture plants, and over 50,000 operating hours, capturing CO₂ from WtE, gas and coal fired power plants, refineries and cement industries.

Our Advanced Carbon CaptureTM technology has been applied across a wide range of industries onshore. We also offer an offshore version addressing emissions from oil and gas production. Our products and solutions cover both mid-range and large-scale emitters.

Carbon Capture as a Service Highlighting the relevance of CCS across Europe. 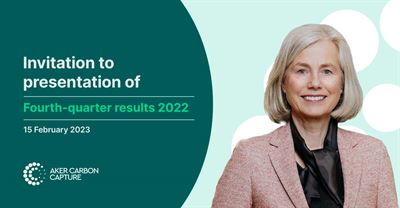 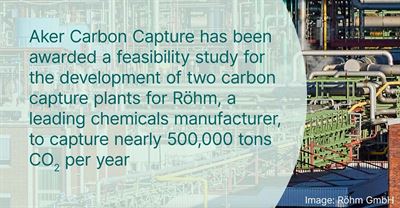 Aker Carbon Capture has been awarded a feasibility study for the development of two carbon capture plants for Röhm, a leading chemicals manufacturer, to capture nearly 500,000 tons CO2 per year. 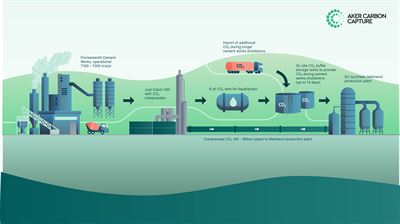 Aker Carbon Capture will deliver a pre-engineering study to the energy company St1 for the development of a carbon capture facility at Finnsementti’s Lappeenranta cement plant. The captured CO2 would be used for the first renewable synthetic methanol plant in Finland. Aker Carbon Capture’s Just Catch unit could capture around 40,000 tonnes CO2 per year, enabling the production of 25,000 tonnes of methanol per year.