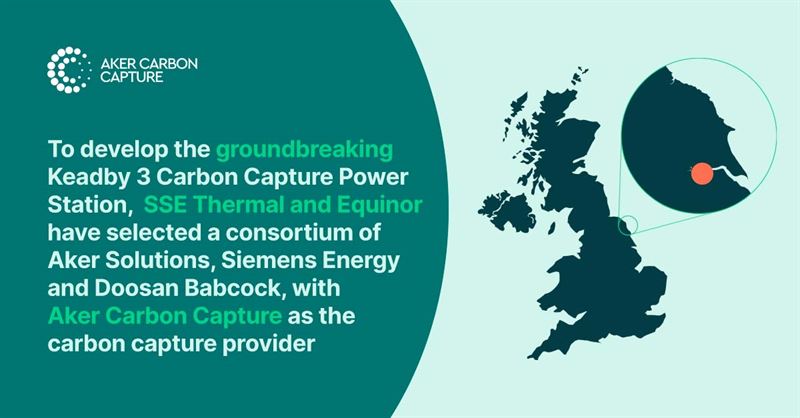 Over the next 12 months, the consortium will deliver together with Aker Carbon Capture a detailed plan for the proposed plant – which would have a generating capacity of up to 910MW -  bringing their vast technological expertise to bear on the realization of the decarbonized power station in the Track-1 East Coast Cluster. Keadby 3 Carbon Capture Power Station is set to utilize cutting-edge gas turbine technology from Siemens Energy.

The UK Government has set ambitious targets for the country to become a world leader in carbon capture and storage (CCS) and Keadby 3 Carbon Capture Power Station will play a pivotal role with the ability to capture up to 1.5 MT of CO2 annually, around four times the size of Brevik CCS. A recently released socio-economic report outlined that the plant could deliver £1.2bn for the UK economy, including significant benefits for the local area.

“Our ambition with Keadby 3 is to deliver one of the UK’s first power stations equipped with carbon capture and through awarding this contract we continue to build momentum behind that goal. The proposed low-carbon plant at Keadby will not only provide vital flexible power while backing up renewables, it will also play a key role in meeting decarbonization targets. The reality is that multiple power-CCS projects will be needed to reach net zero and we hope to see the UK Government recognize that when it provides an update on Cluster Sequencing this summer.” said Catherine Raw, Managing Director at SSE Thermal.

“We are delighted to be an essential part of such an important project with our field-proven carbon capture technology,” said Valborg Lundegaard, Chief Executive Officer at Aker Carbon Capture. “We support SSE Thermal’s strategy to deliver solutions to provide energy needed today while building a better world of energy for tomorrow. This project helps strengthen British energy security and contributes at the same time to the decarbonization of the industry. This is a giant leap forward for Aker Carbon Capture in terms of further establishing our carbon capture business in the UK.”