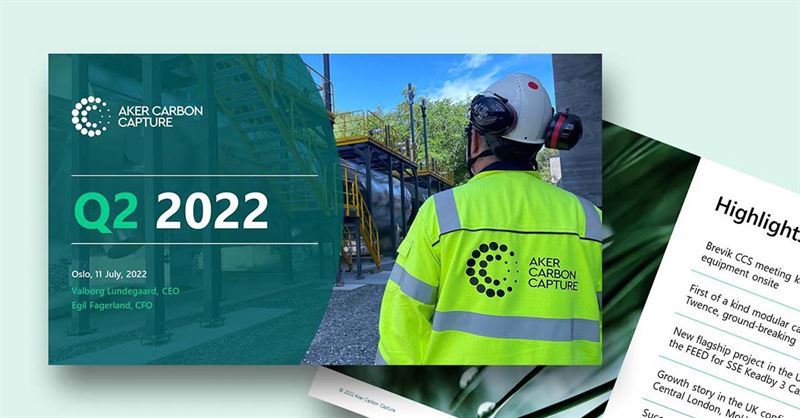 Aker Carbon Capture made strong progress in its existing projects and developed its project portfolio favorably in the second quarter of 2022, as the pure-play carbon capture specialist secured new work in the United Kingdom.

Aker Carbon Capture has entered the construction phase for its flagship projects in Norway and in the Netherlands. The award of a second large-scale front end engineering design (FEED) carbon capture project for the Keadby 3 gas-to-power plant reconfirms the company’s strong market position in the UK.

“The Keadby 3 FEED award is a milestone for Aker Carbon Capture in terms of firmly establishing our business in the UK, and a reflection of the significant tailwinds carbon capture utilization and storage (CCUS) is currently benefitting from,” said Valborg Lundegaard, Chief Executive Officer of Aker Carbon Capture. “CCUS is acknowledged as a cornerstone solution to decarbonize several industries. Despite the ongoing energy crisis, political efforts to fight climate change remain strong both in Europe and the US, driving interest in CCUS and keeping activity levels at Aker Carbon Capture high. We contribute to mitigating the effects of climate change, we help strengthen energy security, and we create and safeguard jobs.”

In its most recent report, the International Energy Agency has restated the need for a large-scale deployment of carbon capture to help reach the midcentury global climate goals.

In May, Aker Carbon Capture reached a key milestone at the CCS Brevik project: the installation of the first major equipment onsite, as the company is building the first carbon capture plant at a cement facility in the world. This marks the beginning of the construction campaign, which will gradually accelerate as heavier equipment arrives. The peak installation activity at Brevik will be in 2023. From 2024, the carbon capture plant will capture 400,000 tonnes of CO2 per year.

In the Netherlands, at Twence’s waste-to-energy plant in Hengelo, construction has officially commenced.  Aker Carbon Capture is delivering its standardized Just Catch™. This first of a kind modular plant will reduce CO2 emissions associated with the generation of energy from the incineration of non-recyclable waste. The captured CO2 will be transported in liquid form and sold into the commercial horticulture sector. By the end of 2023, the Just Catch™ standardized plant will start capturing 100,000 tonnes of CO2 per year.

Aker Carbon Capture is experiencing high activity in the UK, where the Government has set ambitious targets for the country to become a world leader in CCS. We are establishing an office in central London, to serve our growing list of customers and partners.

To develop the groundbreaking Keadby 3 Carbon Capture Power Station, UK energy company SSE Thermal and Equinor have selected a consortium of Aker Solutions, Siemens Energy and Doosan Babcock, with Aker Carbon Capture as the carbon capture provider. The consortium has been awarded the FEED contract for the gas-to-power plant equipped with carbon capture technology to be built in the Humber region. The carbon capture facility will be able to capture up to 2 million tonnes CO per year.

Aker Carbon Capture is now working on FEED studies for two major gas-to-power plants equipped with carbon capture in the UK: earlier this year it started the FEED for bp Net Zero Teesside Power, also with an annual capture capacity of up to 2 million tonnes CO2. Moreover, Aker Carbon Capture signed a Memorandum of Understanding (MoU) with Storegga to collaborate on carbon capture and storage (CCS) projects and enable industrial emitters access to full value chain offerings in the UK.

Aker Carbon Capture aims to take a leading position in the global CCUS industry, and the company continues to target a long-term goal of '10 by 25', which states that the company will have secured firm contracts for carbon capture plants for a total of 10 million tonnes per year by the end of 2025.

EBITDA (Earnings before interest, tax, depreciation and amortization) for the quarter was negative NOK 49 million. This continued to be driven by activity related to research and development, digitalization, tenders, business development, sales and international growth. Aker Carbon Capture ended the first quarter with a robust cash position at NOK 1.5 billion and equity remained strong at NOK 1.0 billion.

The company today also published its first-half report, which is attached and available on akercarboncapture.com.

Aker Carbon Capture will present the results in a live webcast, followed by a Q&A session, today at 15:00 CEST. Click on the following link to follow the event: https://channel.royalcast.com/hegnarmedia/#!/hegnarmedia/20220711_1