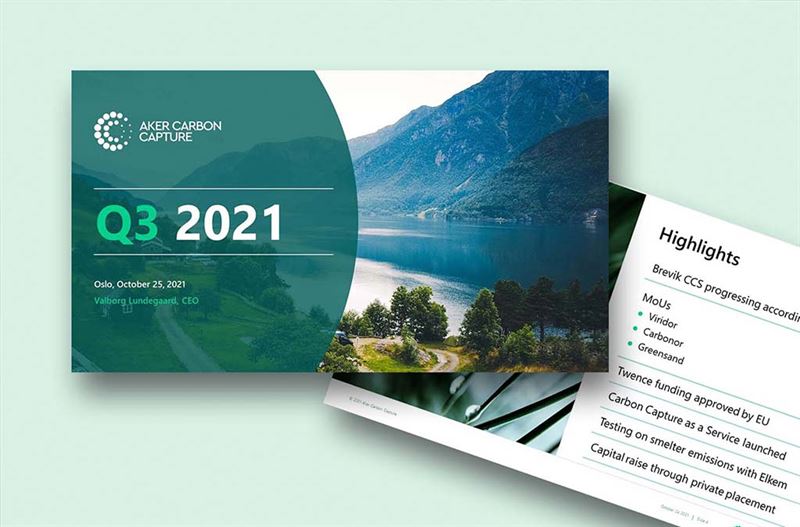 Aker Carbon Capture made good progress with new and existing projects in the third quarter, as the pure-play carbon capture specialist continued its international expansion.

"We see clear signs of acceleration across the carbon capture market worldwide, and we continue to position our company to be a leading player in this important and fast-growing industry," said Valborg Lundegaard, Chief Executive Officer of Aker Carbon Capture.

Highlights in the third quarter included progress made in the Brevik CCS project and securing a number of agreements with new customers in the company's targeted regions and industries.

In the summer, the Group launched its innovative Carbon Capture as a Service business model. This positions Aker Carbon Capture to deliver and operate the full carbon capture value chain through strategic partnerships, and through a service model, allows customers simply to pay per tonne captured CO2. The first project to utilise this approach could be with Carbonor, with whom Aker Carbon Capture signed a Memorandum of Understanding (MoU) to jointly develop the company’s planned low CO2 char production in Øygarden in Western Norway. The project will utilize Aker Carbon Capture's Just Catch 100 technology integrated with Carbonor's pyrolysis technology to produce low-emission, high-carbon reductants for the alloy industry.

The European Commission announced in August that it had found a EUR 14.3 million Dutch investment aid to Twence Holding BV to build a carbon capture and use facility to be in line with EU State aid rules. Aker Carbon Capture has signed a contract with Twence for the project to enable the removal of CO2 from flue gases at Twence's waste-to-energy installation facility located in Hengelo, in the Netherlands. The project is expected to start in the fourth quarter of 2021.

In August, Aker Carbon Capture completed a capital increase of NOK 840 million to support the further growth of its market-leading carbon capture offering. The company issued 38,181,818 new shares in a private placement, priced at NOK 22 per share. The placement was multiple times over-subscribed amidst strong demand, particularly from international investors.

Revenue for the quarter was NOK 101 million, up NOK 32m from the previous quarter. This reflected mostly the good progress on the Norcem Brevik EPC project in the quarter. EBITDA (Earnings before interest, tax, depreciation and amortisation) for the quarter was negative NOK 54 million, driven by high activity across tendering, technology and digitalisation efforts, and supporting the company’s international growth, particularly establishing new entities for the company in Denmark and the UK. There is also a limited contribution from projects due to no recognized profit on Brevik CCS.

The cash and cash equivalents balance at the end of the quarter was NOK 1,398 million, compared with NOK 552 million at the end of the previous quarter. This reflected an underlying cash inflow of NOK 20 million in the quarter, which was helped by an inflow of NOK 77 million in net current operating assets following payment of achieved project milestones in the quarter, and the net proceeds of NOK 826 million from the capital raise in August.

The global carbon capture market saw clear signs of acceleration during the third quarter, with several major supportive policy announcements in Europe and the United States. This was reflected in a growing number of major corporate announcements to utilise carbon capture across a range of emitter industries, many of which centred on the development of multi-industry clusters. The recent ‘Global Status of CCS 2021’ report from the Global Carbon Capture and Storage Institute noted 13 of the 20 industrial clusters in advanced development are in Aker Carbon Capture’s key geographical markets of Scandinavia, Northern continental Europe, and the UK. The report also stated that, as of September 2021, the CO2 capacity of the global carbon capture project pipeline was already some 48 percent higher than at the end of 2020.

Aker Carbon Capture aims to take a leading position in the global CCS industry, and the company last year launched a long-term goal of '10 by 25', which states that the company will have secured firm contracts for carbon capture plants for a total of 10 million tonnes per year by the end of 2025.

Events after the end of the quarter

After the end of the third quarter, Aker Carbon Capture and Viridor, one of the UK's leading recycling, resources and waste management companies, announced plans to help the UK accelerate its decarbonization agenda through a partnership for next-generation modular carbon capture, utilization and storage technology (CCUS). The plans include exploring the installation of modular CCUS plants on five Viridor waste-to-energy sites across the UK. This is part of Viridor’s ambition to bring forward its own net zero timeline by a decade to 2030.

The Group also announced that it will work with Elkem and a number of industrial partners to implement Aker Carbon Capture’s mobile test unit (MTU) with emissions from smelters in the process industry. This will be the first time carbon capture is used for these types of emitters in the process industry, and the project has support from the Research Council of Norway and Gassnova.

Aker Carbon Capture also notes the announcement from the UK Government concerning the UK industrial cluster sequencing, and the selection of the East Coast and Hynet clusters as the projects for Track One, with the Scottish cluster as a reserve. Aker Carbon Capture set up its UK entity in the summer this year, and along with its key industrial partners, considers it is well-positioned for the opportunities this important regional market will offer.

Aker Carbon Capture will present the results in a live webcast, followed by a Q&A session, today at CET 1500. Click on the following link to follow the event: