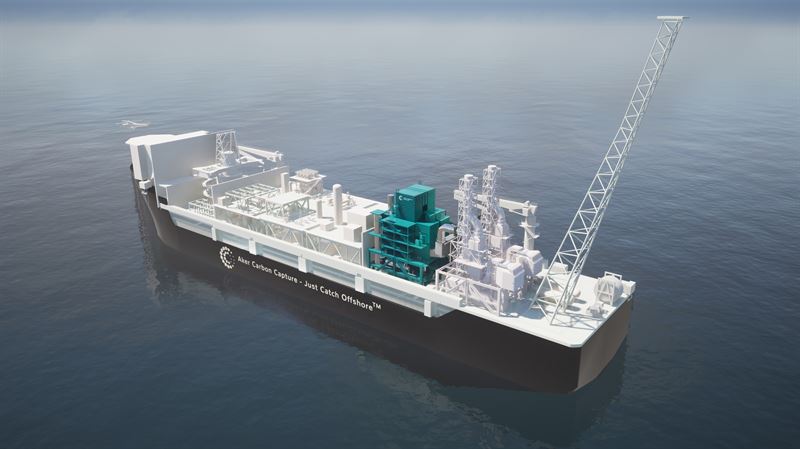 The Just Catch Offshore™, a modularized carbon capture facility for offshore installations, has been successfully qualified by DNV, the global independent energy expert and assurance provider. It is now ready to be deployed in offshore oil and gas fields where Aker Carbon Capture’s proprietary solution can significantly reduce emissions from offshore power generation.

Oil and gas production is a significant source of CO2 emissions. In Norway, the industry accounted for 25 percent of the country’s total emissions in 2021, according to Statistics Norway. As operators are looking for ways to reduce their own emissions, offshore CCS is emerging as a competitive alternative.

“This successful qualification further strengthens the trust from the global offshore market in our Just Catch Offshore™ offering,” said Aker Carbon Capture’s CEO Valborg Lundegaard. “Given its extensive experience in qualification procedures, DNV’s statement offers strong value to both our partners and us. CCS will be an important tool to help decarbonize the oil & gas industry, reducing emissions from gas turbines. CCS can also offer the industry an energy- and cost-efficient way of utilizing the available energy resources by avoiding large electric transmission loss across the onshore grid,” said Valborg Lundegaard.

The offshore facility with Aker Carbon Capture’s proprietary technology is considered fit for harsh weather conditions with severe motions, according to the qualification. The Just Catch Offshore™ solution is now ready for a traditional field development project path, including a FEED phase, EPC delivery and operational support.

Since 2018, Aker Carbon Capture has been working on the development of the Just Catch Offshore™. The product has been optimized and matured through concept studies with E&P and FPSO operators in the oil and gas industry globally. The modularized solution can fit into any type of application where gas turbines are present, bottom fixed as well as floating production facilities, i.e. FPSOs, FLNG, power hubs and offshore power gas plants.

Aker Carbon Capture’s standardized Just Catch Offshore™ offering is based on a modularized design with two standard units of 120 and 180 kTPA as building blocks. The units are typically configured and installed into one module. By combining modules, the capacity can be increased and adjusted in accordance with the specific requirements, providing a significant flexibility towards capture capacity and power demand.

“The CCS module will typically be prefabricated and be made mechanical complete before lifted onboard onto the host facility at the integration yard for further hook-up to the gas turbine stacks, with a delivery time of 20-24 months. The CCS plant capacity is fitted to an offshore facility with several turbines in operation. Various gas turbine models are now considered compatible with our capture units,” said Jim Stian Olsen, Chief Technology Officer at Aker Carbon Capture.

“The proven Just Catch™ onshore plant model has been an important starting point for the development of our Just Catch Offshore™ solution. Nonetheless, as the offshore environment and the design criteria are different from our land-based applications, we found it necessary to undertake a qualification program for our Just Catch Offshore™ unit. The need to include other materials, as well as the necessity to handle and maintain the plant performance during severe motions have been important criteria for further design adjustments,” said Jim Stian Olsen.

Gas turbines that are used for power generation offshore can be an efficient local source of energy, covering the electrical and heat demand for both the offshore host facility, as well as for the carbon capture process. “The energy efficiency can exceed 80 percent when utilizing all waste heat from the turbine exhaust. By implementing CCS instead of power from shore, there is no large electrical transmission loss across the onshore grid, and onshore power can be utilized elsewhere. Where local storage is available, the investment cost of CCS can compete with the cost of a PFS solution in several field developments,” concludes Valborg Lundegaard.

About DNV
DNV is the independent expert in risk management and assurance, operating in more than 100 countries. Through its broad experience and deep expertise DNV advances safety and sustainable performance, sets industry benchmarks, and inspires and invents solutions.

Driven by its purpose, to safeguard life, property, and the environment, DNV helps tackle the challenges and global transformations facing its customers and the world today and is a trusted voice for many of the world’s most successful and forward-thinking companies.

DNV provides assurance to the entire energy value chain through its advisory, monitoring, verification, and certification services. As the world's leading resource of independent energy experts and technical advisors, the assurance provider helps industries and governments to navigate the many complex, interrelated transitions taking place globally and regionally, in the energy industry. DNV is committed to realizing the goals of the Paris Agreement, and supports customers to transition faster to a deeply decarbonized energy system.