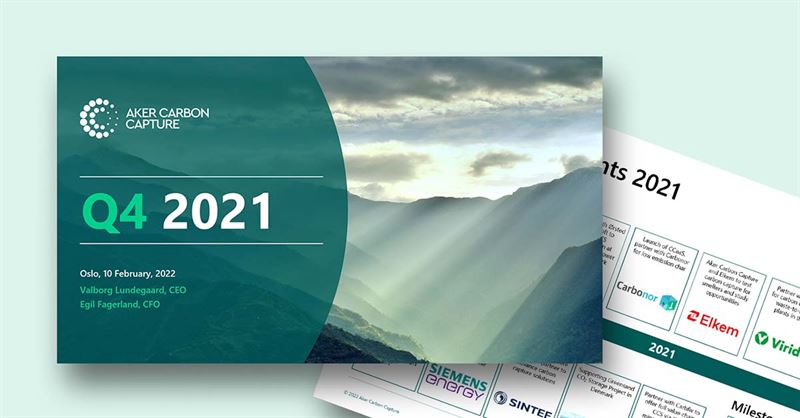 Aker Carbon Capture’s project portfolio developed favorably in the fourth quarter of 2021, as the company secured new work in its key strategic markets.

“The contracts we won in the last three months of the year, combined with progress in existing projects and rising revenue made sure we ended last year on a high note," said Valborg Lundegaard, Chief Executive Officer of Aker Carbon Capture. “Growth in the CCS industry remains supported by record high CO2 quota prices and a rising number of industrial companies that want to reduce their emissions and establish sustainable business models".

Highlights in the fourth quarter included securing a FEED (Front End Engineering and Design) study for the Net Zero Teesside project in the UK, where Aker Carbon Capture is the technology partner to a consortium of Aker Solutions, Siemens Energy and Doosan Babcock. The CCS facility at the Net Zero Teesside gas power station will have a capacity of about 2 million tonnes CO2.

Aker Carbon Capture secured another firm EPC project in December, when it started delivering a Just Catch™ modular carbon capture plant to Twence's waste-to-energy plant in Hengelo in the Netherlands. The plant will capture 100,000 tonnes of CO2 per year and is scheduled to start operating in late 2023.

Viridor, the UK recycling and waste management company, selected Aker Carbon Capture for its plans to install modular CCUS plants on five waste-to-energy sites across the UK – enabling Viridor to bring forward its net zero timeline by a decade to 2030.

In the domestic market, Aker Carbon Capture continued to mature the Brevik CCS project according to schedule, with fabrication work on site expected to commence this summer. Brevik CCS is the world's first industrial-scale carbon capture plant at a cement factory.

The number of ongoing studies for new CCS projects continued to grow, with several new potential projects in the waste to energy, gas to power and cement industries.

Securing strategic partnerships with transport and storage providers is key to the company’s strategy of offering compelling offerings, including Carbon Capture as a Service, to industrial CO2 emitters. After the end of the fourth quarter, Aker Carbon Capture announced collaboration agreements with Altera Infra and Höegh LNG and with Dan-Unity CO2 for sea-based CO2 transport.

Revenue for the quarter was NOK 130 million, up from NOK 101 million from the previous quarter. This reflected mostly the good progress on the Norcem Brevik EPC project in the quarter. Mobile Test Unit operations in Poland, pre-FEED and feasibility studies also contributed positively. EBITDA (Earnings before interest, tax, depreciation and amortisation) for the quarter was negative NOK 66 million, driven by high activity across tendering, technology and digitalisation efforts, and supporting the company's international growth.

Full year revenue was NOK 363 million and the EBITDA was negative by NOK 190 million.

The cash and cash equivalents balance at the end of the year was NOK 1,321 million, compared with NOK 1,398 million at the end of the previous quarter. This reflected an underlying cash outflow of NOK 77 million in the quarter.

The global carbon capture market saw further strong evidence of growth during the fourth quarter of 2021. Policy announcements from governments continued to build momentum in Europe, the UK and in North America. In Europe, in addition to the ‘Fit for 55’ targets for greenhouse gas emissions and support for carbon capture from the EU Innovation Fund, there was also growing dialogue around regulation for carbon removal certificates. In North America, growth prospects were supported by the passing of the Infrastructure Investment and Jobs Act in the US and moves towards an investment tax credit for CCUS and bids for CO2 storage in Canada.

Major corporate net zero strategies continued to progress, also with more interest in voluntary carbon removal markets. The number of carbon capture facilities in operation and development more than doubled in 2021, according to the International Energy Agency. This represented a total capture capacity of some 200 million tonnes of CO2 per year. Wood Mackenzie, the consultancy, noted that over 2021, there were around 50 new carbon capture hub or cluster projects announced globally. The development of such multi-industry clusters has already proven to be a positive driver for the adoption of carbon capture in Europe.

The European market has been a frontrunner in developing the CCUS market, aided by record high carbon emission quota prices. However, a notable development last year was the ascent of markets outside Europe, opening new opportunities for Aker Carbon Capture. One example is North America, given its scale and concentrated CO2 emissions profile. US industrial CO2 emissions are 2.3 billion tonnes per year, the IEA says. About 75 percent of US power plants account for some 80 percent of US emissions, and are located within 50 km of potential storage sites.

“With our unique technology and strong presence in Europe as a base, we will continue to focus on enabling carbon removal from hard to abate sectors. In line with our growth strategy, we may pursue new strategic partnerships to accelerate our business into new markets and industries,” said Lundegaard. “Such strategic partnerships may include an issuance of new shares to provide any such potential partner with a minority equity stake in the Company.”

Aker Carbon Capture aims to take a leading position in the global CCUS industry, and the company has launched a long-term goal of '10 by 25', which states that the company will have secured firm contracts for carbon capture plants for a total of 10 million tonnes per year by the end of 2025.

Aker Carbon Capture will present the results in a live webcast, followed by a Q&A session, today at 15:00 CET. Click on the following link to follow the event: