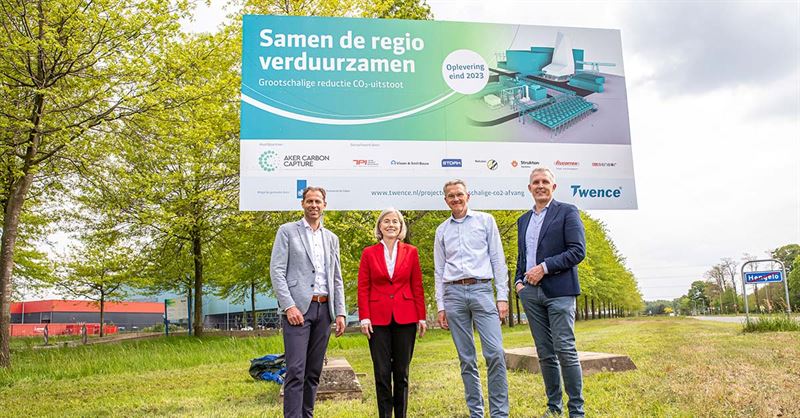 Aker Carbon Capture has officially commenced building its Just Catch™ modular carbon capture plant at Twence’s waste-to-energy plant in Hengelo, the Netherlands. Building activities at the site were kicked off with the unveiling of the construction board. The plant will reduce CO2 emissions associated with the generation of energy from the incineration of non-recyclable waste. The captured CO2 will be used in liquid form in the greenhouse horticulture sector. By the end of 2023, the Just Catch™ standardized plant will start capturing 100,000 tonnes of CO2 per year.

Twence mainly generates energy from non-reusable residual and industrial waste and is the largest producer of sustainable energy in the Dutch province of Overijssel. Twence will capture and recycle part of the CO2 that is released when generating energy. In doing so, Twence will make a significant contribution to reducing CO2 emissions in the region and thus also to achieving the climate targets of its shareholders. In November 2021, the Dutch Ministry of Economic Affairs provided a subsidy of EUR 14.3 million, chiefly because the initiative contributes to the national target to quickly reduce CO2emissions and because it sets an example for other large companies in the industry at home and abroad.

“It is such a great feeling being able to put the first spade in the ground. We have been working closely together with the highly dedicated people from Twence to realize this unique CCU project. We can’t wait to start capturing the first CO2 emissions at the end of next year. Together we will contribute to a CO2-neutral environment. This will set the example for other energy players in the Netherlands and the rest of Europe,” says Valborg Lundegaard, CEO Aker Carbon Capture.

Marc Kapteijn, Twence Managing Director: "It is Twence's ambition to contribute to the circular economy and to produce more valuable raw materials from waste. This CO2capture plant is a wonderful example of that. The realisation of the plant requires knowledge and expertise. Which is why we collaborate with skilled and specialised parties. I look forward to a successful collaboration, one in which safety comes first!"