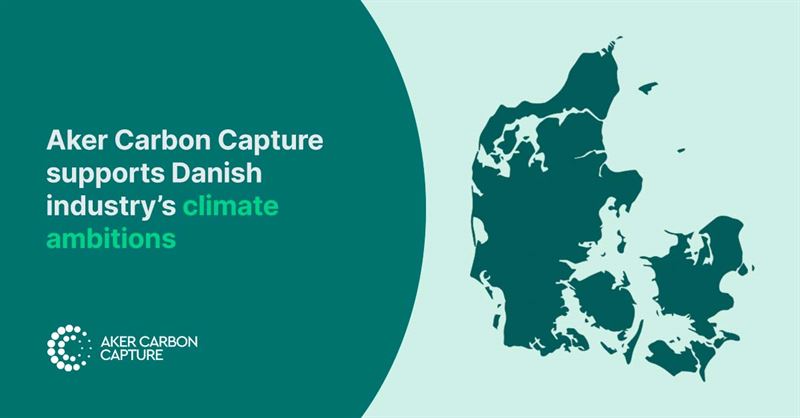 Aker Carbon Capture is expanding its presence in the Danish market as the pure-play carbon capture company is positioning for future growth across several industries in the country.

“We are delighted to contribute to the Danish climate targets by offering our mature and proven carbon capture technology, which in cooperation with Danish industry can enable significant reductions of emissions already before 2025,” said Henrik Madsen, Chairman of Aker Carbon Capture.

The company has already recruited a handful of carbon capture specialists in Denmark and have plans for rapid growth to meet the increasing demand from industry emitters in Denmark and Northern Europe.

Aker Carbon Capture has developed a proprietary and field-proven CCS solution to enable carbon reductions in hard-to-abate industries such as waste incineration, bio-energy and other process industries.

“Most industrial emitters recognize that the CCS technology is mature and ready to be implemented at scale, it is now important to push the creation of further transport and storage solutions for CO2,” says Madsen. Denmark has already several initiatives underway, including the Greensands project alongside other large initiatives in the Nordic region. “Working together across the Nordic region will bring additional benefits, as exemplified by the recent collaboration between Aker Carbon Capture and Carbfix,” said Madsen. Iceland’s Carbfix has developed a solution that turns CO2 into stone in basalt formations.

“Denmark is key to our international expansion plans, with access to highly qualified engineers and partners that have made a mark in green growth industries,” said Valborg Lundegaard, CEO of Aker Carbon Capture. “Danish industry could become a frontrunner in the CCS development by realizing projects with negative emissions and utilizing new business models such as Carbon Capture as a Service (CaaS),” said Lundegaard.

Aker Carbon Capture recently launched a CCS service, offering the full value chain from capture via transport and storage under one pay-per-tonnes solution. “We have seen great interest from emitters for our novel offering, including from companies in the Danish market. With a local presence we will be able to support a range of emitters in Denmark to make use of this unique offering,” added Lundegaard.

The opening will be attended by ministry and representatives from several countries including the Norwegian Minister of Trade and Industry. The Danish office in Hellerup in Copenhagen will be serving Denmark, as well as wider Scandinavia, the UK and continental Europe with projects and technology.