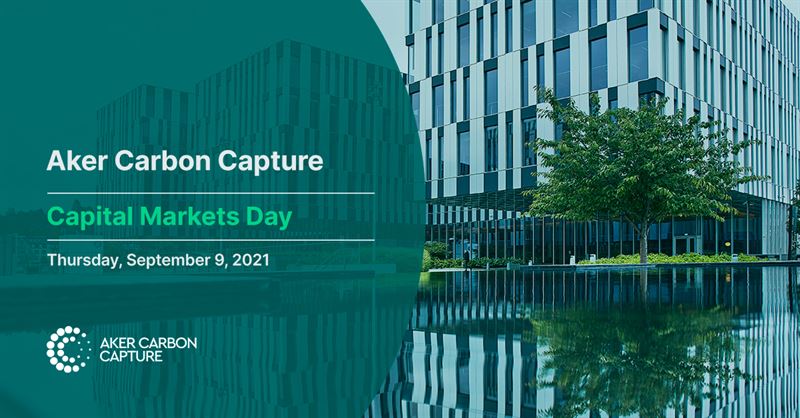 Aker Carbon Capture reiterates its growth plans at today’s capital markets day, which can be followed live from CET 1500 on https://vier.live/act/aker-carbon. The voucher is: Oslo2021.

The company launched its ‘10 in 25’ target after it was launched one year ago, articulating an ambition to secure contracts to capture 10 million tonnes CO2 a year by 2025. Since then, market fundamentals supporting CCS have developed favorably, with several countries launching ambitious CCS strategies and ETS quota prices more than trebling to more than €60 per tonne.

“For the world to reach net zero by 2050, emissions from hard-to-abate industries need to come down significantly. CCS is increasingly recognized as critical solution to reach the targets of the Paris agreement, which is supported by a rising number of emitting companies exploring carbon capture,” said Valborg Lundegaard, Chief Executive Officer of Aker Carbon Capture.

In addition to market fundamentals, Aker Carbon Capture has taken decisive measures to accelerate the growth of the market; forming key partnerships with customers and industrial partners and developing innovative business models to lower the barriers to entry for emitters.

“Working together with the right partners is key to achieve necessary progress toward realizing CCS on a big scale,” said Lundegaard.

Aker Carbon Capture has established partnerships with strategically important players who either complement its offering to the market or share its ambitions to accelerate the market. Some of them will be speaking at the Capital Markets Day, including representatives from Microsoft and Siemens Energy.

There has been a positive market response from a range of prospective clients, including from Carbonor, who will be presenting at the Capital Markets Day. The company recently signed an MoU with Aker Carbon Capture to jointly develop a low-emission char facility for engineered carbon reductants for the alloy industry.

After just one year of operation as a separate company, Aker Carbon Capture is established as a front-runner in the CCS industry.

“We are a purpose and values-driven company, combining decades of experience from developing CCS technology with industrial know-how and a desire to do the right thing,” said Lundegaard.

“Based on the market development we see and the measures we have taken to accelerate the market, I am confident that we are on our way to reaching our ambitious target of 10 in 2025 and making a significant positive contribution toward reducing emissions,” she concludes.