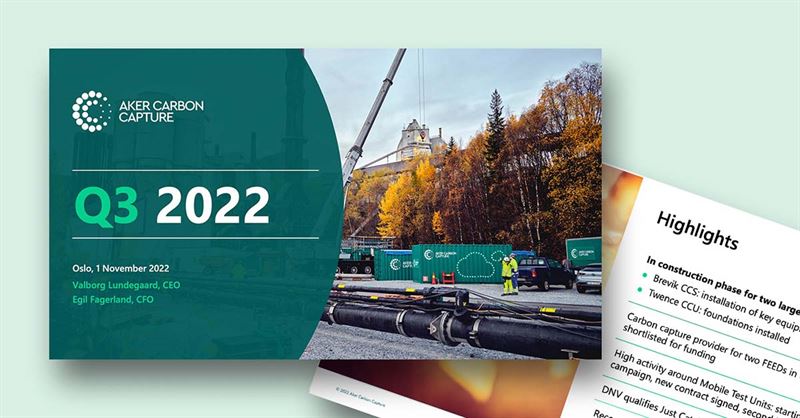 Aker Carbon Capture is delivering the only two industrial scale carbon capture projects under construction in Europe today. At the Brevik CCS project key equipment is currently being installed and at the Twence Just Catch CCU project construction has started.

“Delivering on our project commitment is top priority. In addition to our projects under construction in Norway and the Netherlands we are also the carbon capture technology and key equipment provider for the FEEDs for two mega scale gas-to-power plants with carbon capture in the UK; bp Net Zero Teesside and SSE Keadby 3. By developing these projects, we contribute to mitigating the effects of climate change and help strengthen energy security,” said Valborg Lundegaard, Chief Executive Officer at Aker Carbon Capture.

In the quarter, Aker Carbon Capture started a Mobile Test Unit campaign for smelters for Elkem Rana and SMA Mineral, and was awarded a new test contract with another customer for a campaign in 2024. Due to the high interest from customers a second Mobile Test Unit is under construction.

The Just Catch Offshore, a modularized carbon capture facility for offshore installations, has been qualified by DNV. It is now ready to be deployed in offshore oil and gas fields where Aker Carbon Capture’s proprietary solution can significantly reduce emissions from offshore power generation.

Aker Carbon Capture aims to take a leading position in the global CCUS industry, and the company has launched a long-term goal of '10 by 25', which states that the company will have secured firm contracts for carbon capture plants for a total of 10 million tonnes per year by the end of 2025.

Aker Carbon Capture saw continued revenue growth through the third quarter. Revenues reached NOK 204 million in the period, which was up more than one hundred percent compared to the same period last year.

Aker Carbon Capture will present the results in a live webcast, followed by a Q&A session, today at 15:00 CET. Click on the following link to follow the event: