My name is Nathalie, I am 14 years old, and I spent two days in the Aker Carbon Capture’s office in Norway. A couple of weeks ago my school gave me an assignment to get experience in the work life. Not going to lie, my first thought was to contact a café, but after a while, I decided that it sounded interesting to learn more about companies that work towards the Paris agreement and UN´s Sustainable Development goals.

After spending two days observing the office, getting my own tasks, speaking to employees, and learning more about the carbon capture technology, here is what I found out.

First of all, why would someone dedicate a whole company to capturing carbon? If you haven’t been dead the last 20 years, you probably know why. Our world as we know it today is slowly falling apart. We are filling the atmosphere up with all kinds of toxic gasses, and there is soon more plastic than fish in the sea. If we don’t change our way of living drastically now, there soon won’t be more to change. One of our biggest problems is the amount of CO2 in the atmosphere. Almost everything we do produces a toxic gas called CO2. Cars, airplanes, boats, eating meat, producing anything, you see my point? Let’s look at it another way. If everyone in the world lived like an average Norwegian, we would need a total of 3,4 earths to survive. The problem is that we only have one, and as far as science and research goes, moving to another planet is not an option yet. Therefor we need another solution and that is where ACC comes in. ACC stands for Aker Carbon Capture and is a relatively new company that uses a revolutionary technology to capture carbon.

ACC have one main goal and that is to capture carbon. It is also important to the company that they contribute to reaching the goals signed in the Paris Agreement where the goal is to limit global warming. The agreement states that we need to limit global warming to a maximum of 2 degrees Celsius (hopefully closer to 1,5) compared to the pre-industrial temperature of the earth. ACC also have a goal themselves that says that within 2025 they will have secured contracts to capture 10 million ton CO2 every year. That is the same as removing 5 million fossil cars every year. This is an ambitious goal!

I took the liberty too speak with some of the employees of ACC, and asked them among other things “Do you think you are going to reach the company’s goal within 2025?”. I didn´t speak to anyone that thought that was off limits. Don’t get me wrong, every one of them signified that it was an ambitious goal, but every one of them were also willing to go that extra mile to accomplish that goal. Everyone meant that capturing carbon is an essential step to save the earth and that that´s why they wanted to work in ACC.

Let´s look at how the carbon capture technology really works. ACC has over many years developed this technology you can connect to an emitting plant so the emitter doesn’t let out any CO2. To make it easier to understand the process, you can think of the carbon capture plant as a shower.  When the flue gas enters the plant, it gets showered in a liquid that loves CO2, called amine. The amine captures the CO2 at the bottom of this “shower” while the excess non-toxic gas gets released. Thereafter you need to separate the amine and the CO2. Next is to boil the mixture so that the amine releases the CO2. Then you can send the amine back to the shower for reuse and you have pure CO2 captured in gas form. Depending on how you’re going to use the CO2, you can either keep it in its gas form or liquify it. Usually, you liquify it so you can transport it. If you have large amounts of CO2 the best method to get rid of it is to put it under the ground in old gas/oil chambers.

Even though the technology is working, ACC still have a few challenges. The biggest challenge is money. Take a look at the Brevik project for example. The contract has a value of more than a billion NOK. Something ACC quickly noticed was that not many companies have that kind of money, which limits the amount of factory’s willing to join the carbon capture journey. In order for this to help the world, you need a certain amount of commitment from the rest of the world as well, but ACC came up with a solution called “Carbon capture as a service”. Carbon capture as a service is a concept where the companies pay for how much CO2 they catch while ACC pays for the capture plant itself.

Now my two days at ACC are over and I am excited to go back to school and tell them about my experience here. I have learned a lot about how a typical workday looks like for some and I have met so many interesting and kind people. Before I leave, I have three questions for the future of this company.

About ACC
Aker Carbon Capture started developing the new carbon capture technology in 2005, and it has been offered commercially since 2009. The revolutionary technology captures CO2, so you can use it where you need it. ACC is one of the only companies in the entire world to have mastered this technology making it biodegradable, non-toxic, minimum emission, minimum liquid waste, minimum corrosion and with  low-energy requirements.

Projects
ACC has multiple ongoing carbon capture projects, but the first and biggest project currently is the Brevik project.

Brevik project
The capture plant currently being built at Norcem´s cement factory in Norway is going to be the world’s first ever large-scale capture plant. The construction started in January 2021 and it will be finished in 2024. The plant costed about 1,8 BNOK and estimated CO2 capture annually is 400,000 tons. Aker Carbon Capture in the main contractor of this project, with support from Aker Solutions. 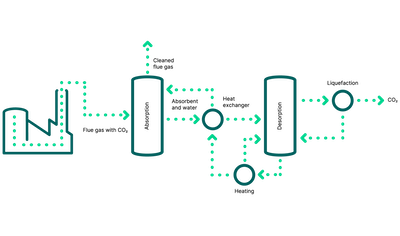 ACC from a Junior High view